An entertainment evening has raised a huge £1,100 to help make a disabled youngster more comfortable. 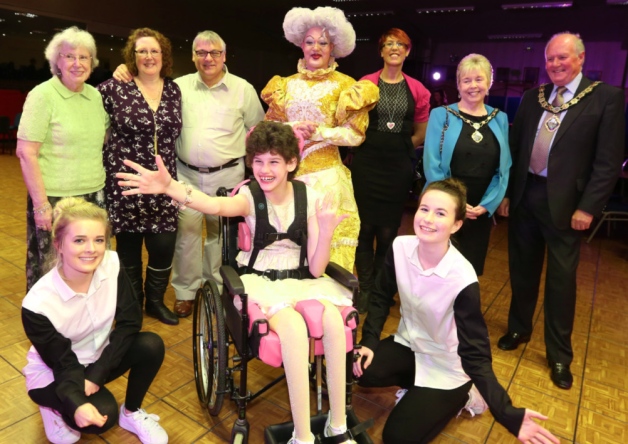 The event, dubbed Bring It On, was held at Rushden Town Bowls Club, in aid of 12-year-old Nikita Ray, who suffers from a number of disabilities.

The evening was organised by Jayne Wiggins, from Rushden, who had never met Nikita or her family prior to organising the event.

Jayne said: “It was an absolutely brilliant success. It was a community effort in that so many people gave up their time for free.

“It’s been brilliant to raise money for Nikita and to become friends with Nikita and her family. We will be going on and doing more with them.”

The 12-year-old’s dad Malcolm Ray has paid tribute to Jayne for the work she did organising the fundraiser.

Malcolm said: “It was a lovely event. Nikita came along and had a great evening watching the dancing.”

He added that the family had been pleasantly surprised when Jayne approached him to propose holding the event.

He said Nikita was doing well at Greenfields School in Northampton, saying: “They are bringing her along like you wouldn’t believe.”

Mum-of-three Jayne planned to support 40 charities to mark the run-up to her 40th birthday.

“Although she fell short of her target she has continued to do what she can for local good causes.

She said: “I chose the Nikita Jade Disability Fund after a promotion celebrating almost 10 years of the fund raised the profile and reminded me how often I have seen this little girl in the town as her family have been at events like Party in The Park and Christmas events in the High Street.”

The evening featured music, dance and other entertainment. More than 330 people attended throughout the evening.

Reply Alfonsoalafe
8:26 AM on March 15, 2021
The matrix measure I byword Gail Dines converse, at a colloquy in Boston, she moved the audience to tears with her description of the problems caused nearby dirt, and provoked laughing with her spicy observations roughly pornographers themselves. Activists in the audience were newly inspired, and men at the result – sundry of whom had on no account viewed smut as a disturbed before – queued up afterwards to pawn their support. The display highlighted Dines's tense charisma and the deed data that, since the dying of Andrea Dworkin, she has risen to that most baffling and exciting of mr roles: the world's cardinal anti-pornography campaigner.

Reply Terryapolo
2:33 AM on March 15, 2021
The last over and over again I byword Gail Dines stand up for, at a conference in Boston, she moved the audience to tears with her statement of the problems caused by means of obscenity, and provoked chortling with her virulent observations roughly pornographers themselves. Activists in the audience were newly inspired, and men at the end – multifarious of whom had not viewed obscenity as a muddle first – queued up afterwards to guarantee their support. The exhibition highlighted Dines's tense charisma and the deed data that, since the death of Andrea Dworkin, she has risen to that most scabrous and captivating of free roles: the elated's foremost anti-pornography campaigner.

Reply HomerCox
3:31 AM on February 1, 2021
Hello, My friends and I are excited That we discovered social site a lot important facts here. My family and I operate a

. if you are everywhere in Collin County Texas I will give you a great deal on a new hairstyle Cheers, Aya.

url=https://bansocialism.com/ says...
how much does cialis cost


They also offer brokered installment loans up to $2,400, a savings program and access to free financial tools.

Reply RobertViarp
6:59 PM on August 7, 2018
Has taken from paid resources and now I share with you the best XXL video free of charge!!! Negro huge penis!!!